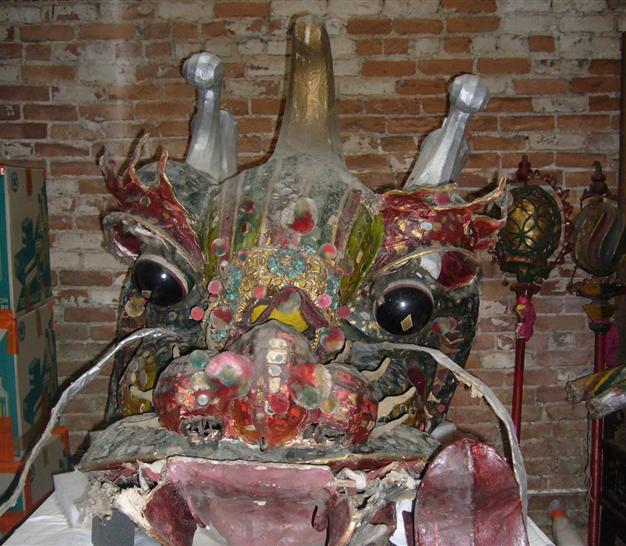 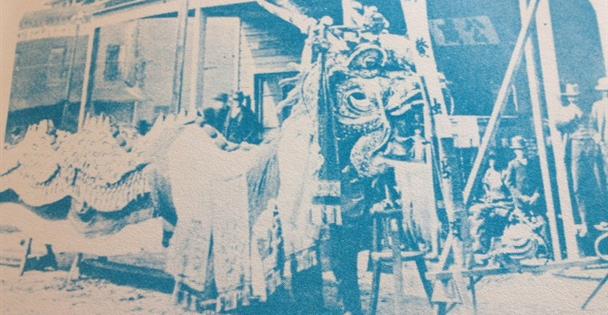 As he is displayed today at The Bok Kai Temple.

The dragon in front of the old Suey Sing Building before 1900.

Today's Marysville Bomb Day parades "aren't what they used to be," old-timers claim. Their complaint: "Gum Lung (translated as Golden Dragon) isn't in it!"

For newcomers here, Moo Lung is Marysville Chinatown's once famous parade dragon. He hasn't been out to play or scare off evil spirits since 1937. He's been crated and preserved in the Bok Kai Temple by the Marysville Chinese Community.

Age has taken its toll on the material which made up the elongated body of this once proud and colorful mythical serpent, which was crafted by artisans in China before 1900 and shipped to Marysville at the cost of between $5,000 to $6,000. It was regarded as the largest and finest parade dragon in the United States up until the Second World War. Gum Lung was the featured attractions of all the early Bomb Day processions. So famous was he that Chinese Communities in New York, Chicago, Los Angeles, San Francisco, Seattle and many more cities obtained his services in parades. In fact, Moo Lung was exhibited at a Worlds Fair in New York.

When first brought over from China, Moo Lung stretched out over 150 feet, utilizing about 100 men to carry him. But tears shortened this giant serpent to 100 feet when he was last seen in 1937 in San Francisco for a Chinese hospital charity parade. This silken, jointed and jeweled reptile was the first dragon brought to this country. It was last paraded in Marysville in 1930, after having been idle since 1916.