The bombs are fired in a roped arena where young Chinese, and occasionally adults, scramble for "good fortune" rings, which are shot into the air from the bursting bombs, and traditionally bring luck throughout the year. The rings may be kept by those who retrieve them in the scramble, but are often sold to people who want to keep the lucky rings for the year. Those who purchase them it turn pay a fee at the temple to hold onto them.

In addition to the fun and excitement of the celebration, Bomb Day has another aspect: it enables the faithful to worship at the temple, which honors The Bok Kai, the deity responsible for banishing evil spirits and controlling the rains and floods of the spring in time for planting season. Durning the ritual of worship at the temple, each individual finds out what fortune the new year will bring. 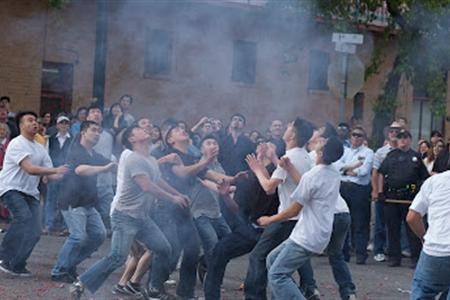 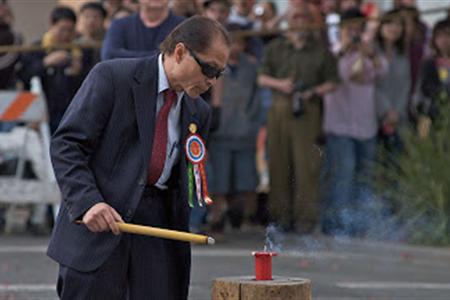 Bomb Day, or in Chinese, Yee Yeut Yee, takes its name from the colorful firing of the bombs highlighting the celebration, which is in tribute to the Chinese Water God, The Bok Kai.

The annual two-day events draws thousands from Marysville and its surrounding communities. It also attracts thousands of people from all parts of the United States, Canada and Mexico, who come to worship at the Bok Kai Temple and join in the festivities.

Although the celebration includes the colorful parade, Chinese opera, dance, exhibitions by Lion Dancers, banquets and other entertainment, the highlight of the event is the firing of the bombs.